WE BOUGHT OUR BEES TODAY! Our director, Oscar, came back from his business trip, corralled me, Mads and Baltezar into his car, and drove us to his “bee guy” in Cusco. Well, this was a friend of his former bee guy who now is apparently a fugitive avoiding law enforcement somewhere in Argentina. Sounds a little crazy, but apparently todos los apicultors en Peru son un poco loco, and actually, that’s pretty much the same in DC too. Anywho, I digress. Once we got to the Mundo de las Abejas de Jossua (a self-proclaimed Gringo, according to his flyers) the Quebecoise owner, Jossua, immediately starting falling all over himself to help us out. We told him about Almeria and our current state of funding, or better yet, lack thereof, and immediately he jumped on board, handing us some sort of cure-all diluted propolis spray por los ninos.

Over the course of what seemed like five hours, Jossua had — very thoroughly — gone over the beekeeping basics, rattled off the same bee statistics that Jeff Miller and I quote for DC Honeybees engagements, scooped out taste-testers from each of his honey/pollen products, and last but not least, showed us his nucleus colonies on the rooftop behind his shop (sound familiar Jeff?). 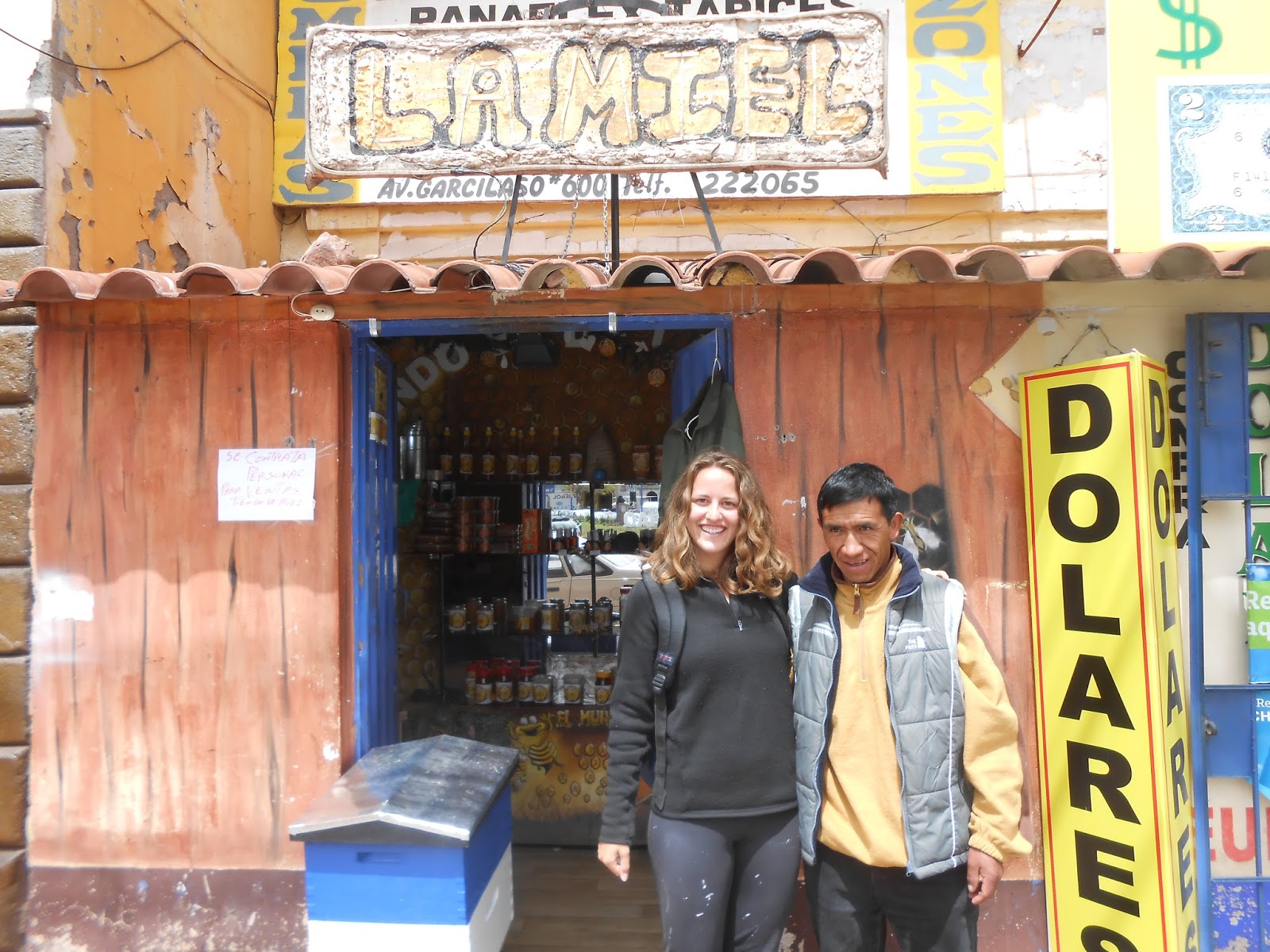 An expert salesman, the former Frenchman had no shame in pointing out which pieces of his equipment were crap, and which were the best. He positively lit up during our lengthy conversation, bouncing from the medicinal properties of honey, to explaining how an extractor worked. Though it was impossible to get a word in, and follow his train of thought, Jossua was extremely helpful and accommodating. When all was said and done we walked out with two complete hives (each to be started with a nucleus colony), two suits, two pairs of gloves, two veils, two kilos of wax to start the frames and one smoker.

A huge thanks goes out to Global Bees, which agreed to fund this installation. As executive director of DC Honeybees, we decided to partner with Global Bees, a DC-based organization that aims to initiate small-scale sustainable development projects, in order to expand our mission of propagating beehives and promoting beekeeping.

The way Jossua works is this. Today we signed a contract for all our beekeeping needs, and on Sunday he’ll come out to Almeria to scout a location — one that’s far enough away that no ninos are tempted to tamper with the buzzing boxes. After that he’ll come back and set up our nuc colonies and give us a tutorial on apicultura. With the rainy season approaching — and accompanying nectar-flow I presume — he said we’d be ready for our first harvest anywhere between three and six months. 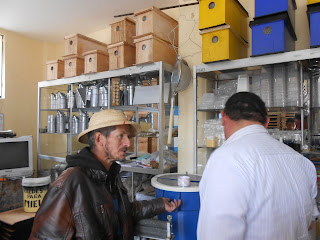 So a few things are different between beekeeping here and in the states. (I’m about to go pretty bee-nerd right now, so if you’re just in it for the honey, I’d say get out now.) When Jossua set up a model hive, it only consisted of two standard supers, and your regular inside and outside covers. I asked about honey supers and he said we wouldn’t need them. Hmmm, skeptical. I pressed him (with Mads’ help) and he said pretty confidently that the queen doesn’t move up into the top box. Not only that, but he also said the bottom box should have ten frames, but the top only nine, but not to make room for some kind of feeder. Jossua said the more-than-bee-space would allow for fatter honey frames. At least this one made more sense to me.

Also he said the breed of bees we’d be getting is an Italian-African hybrid — best of both worlds, which, I’ve also heard about Italian-Russians. And, as I suspected, Jossua warned emphatically about always wearing your suit when handling frames, adding that hot smoke would only make them more aggressive and suggested using cooler smoke. The Africanized bees are no cool DC-Italians. They’re “persnickety” at best, as Jeff likes to say, and they — as their name would suggest — aren’t the best at over-wintering. Still, they are the most disease-resistant breed out there. And yes, these are the notorious “killer bees,” but Jossua assured he hasn’t had any sort of issue with the Italian-Africans in the 12 years he’s been working in Peru. For the most part these bees operate just like my sunny Italians, coming to a full population about one month after dropping in a nuc. Sounds like it’s time to get my nectar-flow on.